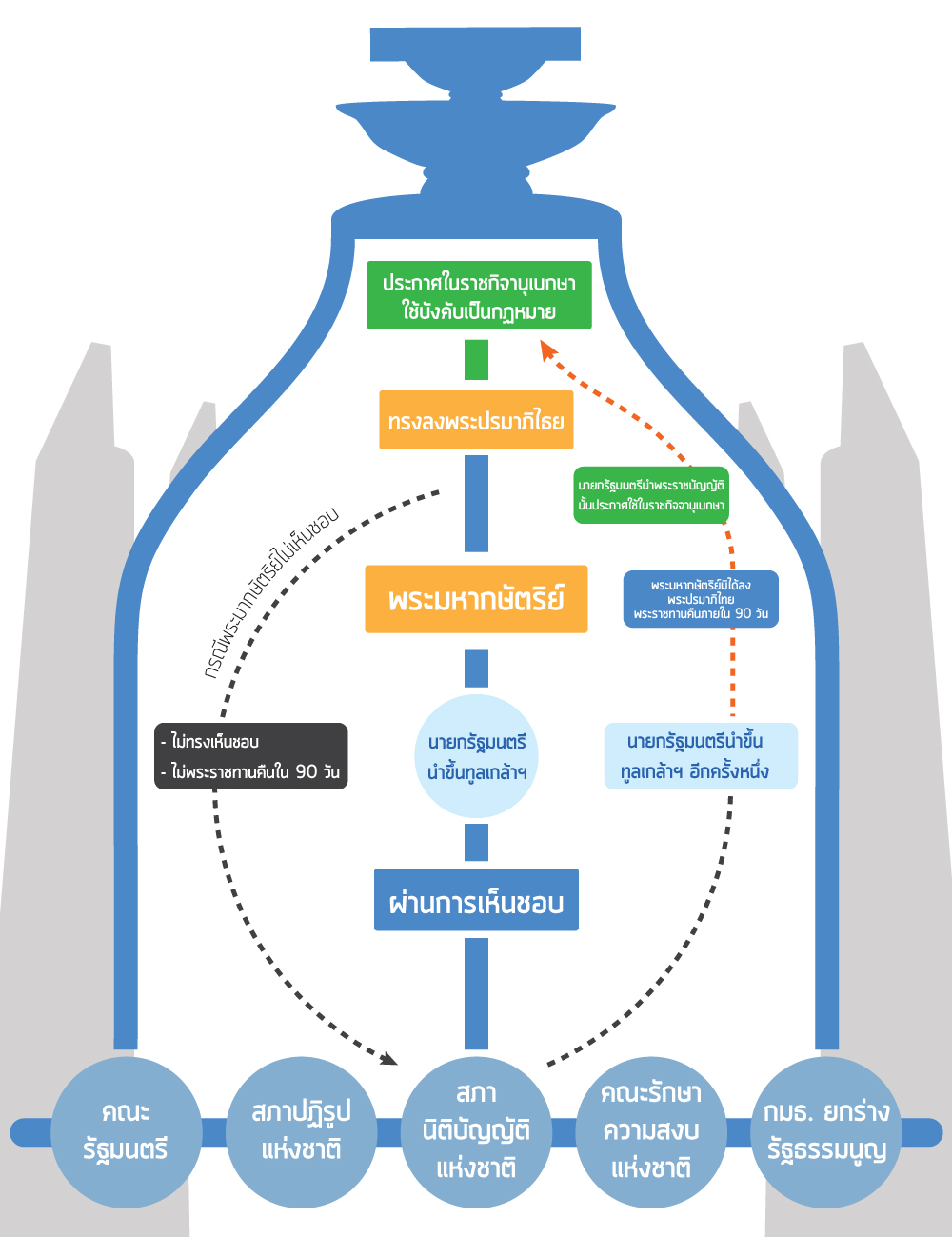 The thai parliament
Democracy Parliament is an important legislative body by enacting legislation. To administer the mainland To oversee the administration of the government in accordance with the policy announced to the council. The form of the Thai Parliament since the rule of law since 1932, it appears that the constituent elements of the Parliament depend on the form of Parliament to be a single parliament or two. Including the origin of parliamentarians. Authority, Responsibility and Independence of Parliament This will enable Parliament to become a functioning executive body.

Thailand, we have already used the two systems of Parliament, one parliamentary system. And two parliamentary congressional systems Each system has different characteristics and limitations:

1. Parliamentary Assembly only The key characteristics of a single congressional assembly are: There is only one legislative member, such as the National Legislative Assembly. But the only one in Thailand is split up again.

1.1 A single council consisting of two types of members and two types of members is Members who are directly elected. And the members of the nomination. As can be seen from the Constitution of the Kingdom of Thailand in 1932.
1.2 Single council consisting of only one member There are only members who are appointed, such as the National Legislative Assembly established in accordance with the Constitution of the Kingdom of Thailand BE 2515

The National Peace Corps (KBC), consisting of the Royal Thai Army, Royal Thai Navy, Air Force and the Royal Thai Police. Has entered into the governing power of the country since 22nd May 2557 at 16.30 onwards, by declaring the Constitution of the Kingdom of Thailand BE 2550 ending except in Section 2 King. And have promulgated the Constitution of the Kingdom of Thailand. (Provisional), July 2557, on July 22, 2014, with the reasons for seizing power as shown in the foreword of the Constitution. (Provisional), BE 2557: "As the political conflicts in Bangkok and surrounding areas have continued for a long time. Until it spread to almost every region of the country. People break into different parties, lack of harmony and attitude are not friendly to each other. Sometimes violent Use of force and weapons of war to assault persecution. The welfare and well-being of people are not normal. Economic and political development, disruptive administration, affecting the exercise of legislative, administrative and judicial power. Law enforcement does not work. It is a terrible crisis never before. Although the state has resolved the problem through legal mechanisms and measures, such as the adoption of laws on the maintenance of public order in various circumstances, the dissolving of the House of Representatives and the establishment of general elections. And parties that are not parties, such as private business organizations, constitutional organizations, political parties, the military, and the Senate, have tried to reconcile negotiation. But it did not work. There will be new legal and political disputes. A whirl of unending issues While the conflict has expanded exponentially and tends to intensify until the riots are over, it can endanger the lives, property, comfort, and integrity of the people. Impact on the livelihood of farmers. Especially farmers Economic development of the country Prevention of natural disasters Trust in state power. And the confidence of foreign investors. It also opened the door to more crime and unrest. It will destroy the national security and the people's faith in the democratic system of monarchy. Constitution of the Kingdom of Thailand (Provisional), BE 2557, Section 6, provided that The "National Legislative Assembly" is composed of up to 220 members, appointed by the King, according to the National Peace Corps, offering advice from Thai nationals by birth and at least 40 years of age. Knowledge And diversity of individuals from the public, private, social, professional, and other sectors that will benefit the performance of the state legislature.
Source: Chulalongkorn 11, Issue 4 July - August 2014, Legal Office, The Secretariat of the Senate

In the event of a problem with the legislative branch of the state legislature. And this is not the case with the provisions of this Constitution that will apply to such cases. The National Assembly is the deciding judge.

(Section 6, paragraph two), the National Legislative Assembly acts as the House of Representatives, the Senate and the Parliament.

In the case of any bill or bill The King did not approve and returned to the National Legislative Assembly. The national legislature will have to consult the bill or bill. If the National Assembly has the same resolution, by a vote of not less than two-thirds of all existing members. Let the Prime Minister bring the bill or the bill into the Constitution again. When the King has not signed his name and returned within 30 days, the Prime Minister shall bring the Act or the Organic Act into force in the Government Gazette, as if the King had signed him.

5) Approval or disapproval of an Emergency Decree (Article 21)

When there is an urgent emergency, for the sake of maintaining the security of the Kingdom. Public safety Economic stability of the country Or prevent a public disaster Or when it is necessary to have a tax or currency law to consider urgently and secretly. The King has the power to enact an Emergency Decree, such as the Act When the decree was enacted. The Cabinet shall propose such an Emergency Decree to the National Legislative Assembly without delay. If the National Assembly approves The enactment of the Emergency Decree shall continue to be effective as the Act onwards. If the National Assembly does not approve The decree shall be repealed but shall not affect the business of the period during which the Emergency Decree came into force. Unless the Emergency Decree has the effect of amending or repealing any law. Provided that the provisions of the law existing prior to amendment or termination shall continue to apply from the date of the death of such decree. Approval or disapproval of an Emergency Decree shall be published in the Government Gazette. In case of disapproval, effective from the date of publication in the Government Gazette.

The National Legislative Assembly has the power to enact regulations governing the election and performance of duties of the President, Vice-Presidents and the Commission. How to Meet Proposing and Considering Draft Bill and Draft Organic Proceedings Proposals, Debates, Voting, Drafting Keeping order and order And other undertakings to carry out the authority

8) Asking the Minister on any subject matter (Section 16, paragraph one)

At the National Legislative Assembly All members have the right to ask the Minister. In any matter about the task on the page. But the minister has the right not to respond when he sees that the matter should not be disclosed because of the safety or important interests of the land. In this case, the National Legislature will enact a quorum, which is different from that provided for in Section 13, paragraph one.

9) The motion to open a debate to ask the facts of the Cabinet (Section 16, paragraph two)

When there is a problem National Legislature is not less than one-third of all members. To be nominated for a motion to open a debate to question the facts of the Cabinet, but to vote for trust or not trust.

12) Consideration of approval of any contract (Article 23)

Which contract has changed the territory of Thailand. Or territory outside the territory Thailand has sovereignty or jurisdiction under the treaty or international law. Or to issue a law to comply with the contract. Or that affect the country's economic or social security widely. Must have the approval of the National Legislative Assembly. In this regard, the National Legislative Assembly must consider the completion within 60 days from the date of receipt of the matter. A contract that affects the economic or social security of a country extensively means. Free Trade Agreement Joint Customs Area Or the use of natural resources or cause the country to lose all or some of its rights to natural resources. Or otherwise as required by law.

15) Consideration of approval or disapproval of draft amendments to the Constitution. In the event that the Cabinet and the National Peace Corps have jointly resolved to amend the Constitution of the Kingdom of Thailand (Provisional) BE 2557 (Section 46)